. .the collection, preservation, interpretation, and dissemination of historical information pertaining to the region drained by the Antietam creek and its tributaries in Franklin county, Pennsylvania, and Washington county, Maryland.

“Copper Mining around the South Mountain” Beginning around 1833 and ending around 1900, small-scale copper mining occurred at various points around the South Mountain for several miles on either side of Mason and Dixon’s line. It’s history is a fascinating story of great ambitions, broken dreams, geological scholarship, and a little intrigue. Some impressively pure native copper specimens were extracted from the shafts sunk in the mountain; however, the veins were never rich enough to interest large-scale capital, and by the early Twentieth century, copper mining around the South Mountain was but a memory.

With great good humour, Mr. William S. Stanely recounted the famous physician’s career, including his summer residence on the heights above the Antietam country, at second Anuual Meeting. 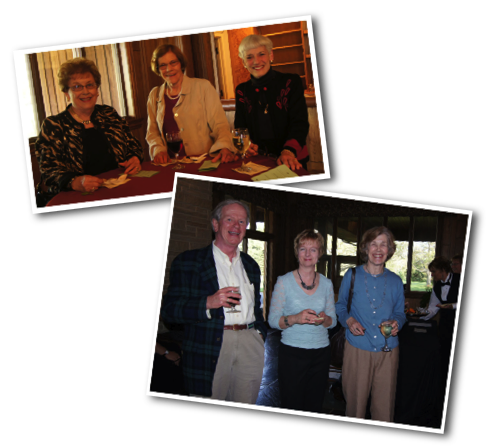 This year the Social Hour featured an exhibit of artifacts pertaining to the Reed family, including Dr. Reed’s dress sword, a woven bowl acquired during his Western tour of duty, a silver waste bowl from the Reed’s tea service, and numerous books and photographs. Dr. Reed’s widow and daughter struggled financially following his untimely death, and the latter conducted Blossom Inn at Blue Ridge Summit as one means of obtaining a livelihood.

Some fellows of the Association returned for a second year. In the top photograph above (from left), Miss Shirley Zeigler, Mrs. Eunice Statler, and Mrs. Angela Grove Weagly enjoyed drinks during the Social Hour.

Blue Ridge Summit was well represented at the meeting. In the lower photograph above (from left), Mr. Don McIntire, Miss Sally T. Stanley (also returning for her second year), and Mrs. L.P. Pascoe paused for the camera of AHA photographer Mr. Sidney E. Miller. Miss Stanley and Mr. McIntire both contributed items to the exhibit. Mrs. Darlene Shockey Weddle (above, right) is the most recent inductee of the Captain Thomas Wallace Society of The Hereditary Societies of Waynesboro. She was approved for membership by virtue of descent from Christian Keagy, one of Captain Wallace’s militiamen. Here President Rock presents her with her first Hereditary Societies certificate.

Not unlike last year’s reaction, every one of the fifty-three Fellows and guests in attendance seemed to enjoy the second Annual Meeting. Fellows came from as far as away as Pittsburg to join in the festivities and enjoy the mountain scenery as well as a side trip to the Gettysburg Battlefield.

In Number 6 of The Rivulet, the Association expressed the hope that a large number would assemble for the second Annual Meeting “amid the rustic splendor of Blue Ridge Summit, where the most notable military physician in the world once sought relief from the tedium and heat of Washington in the summer.” With a respectable attendance of happy Fellows and guests – and a beautiful, clear day – that hope seems to have been realized. A lesser-known fact about Dr. Reed is that he was one of the first Washington officials to select greater Blue Ridge Summit as a summer residence.

The honorary distinction is named for Herbert Charles Bell (1868-1935), a native of Leitersburg district, Washington county, Maryland. It recognizes commitments to accuracy in Antietam History, is an exclusive lifetime award, and entitles the recipient to style himself the “Herbert C. Bell Fellow of Antietam Historical Association.”

Herbert C. Bell was a professional historian, farmer, and Lutheran clergyman. His best-known work is probably “History of Leitersburg District” (1898). It is generally accepted as an authoritative work of regional history, and was published at a time when many such works were far less accurate and objective.

Mr. Frye is well known in historical circles in the Cumberland Valley and beyond. He is perhaps best known as the longtime director of the Western Maryland Room of the Washington County (MD) Free Library, a post he still fills with enthusiasm. But he is retired from a long career of public service as a National Park Service ranger, director of maps for the Western Marlyand counties, and an authority on regional canal history. He sometimes lectures on the importance of accuracy in local history. Antietam Historical Association (AHA) held its first Annual Meeting on Thursday, March 24, 2011, at The Lodge at Blue Ridge Summit. Forty-two persons made reservations for the evening. The festivities began with a social hour during which the featured speaker for the evening, Dr. Denise A. Seachrist, Director of the Hugh, A. Glauser School of Music, Kent State University, was available to inscribe her new book, Snow Hill: In the Shadows of the Ephrata Cloister (Kent State University Press, 2010). Dr. Seachrist inscribes her book for new Subscribing Fellow Miss Sally Stanley as other attendees chat by the welcome fire.

President Rock returned to the podium to recapitulate our first active year. She also named the applicants thus far inducted into the Alexander Mack Society – Dr. A. Kathryn Oller, Mr. Michael R. Flohr, and Mrs. Raymond Ingraham – and announced the establishment of the B. M. Nead Fellowship.

The Nead Fellowship is an honorary distinction recognizing significant literary contributions to Antietam History. The lifetime award is named for Benjamin Matthias Nead (1847-1923) and entitles the recipient to style himself the B. M. Nead Fellow of Antietam Historical Association.

President Rock announced that Vice-President Todd Andrew Dorsett is the first recipient of the Nead Fellowship.

B. M. Nead was born near Greencastle, in Antrim township, Franklin County, PA., and within six miles of Waynesboro. He spent most of his youth, however, at Chambersburg, PA. He obtained his early education in the latter town, and was graduated from Yale University with the Class of 1870.

In 1872, Nead began the practice of law at Chambersburg. Several years later he moved to Harrisburg where he spent six years as State-tax deputy for the Auditor General. He was also legislative correspondent for various Pennsylvania newspapers during the same period. From 1881 until his retirement around 1921, he practiced law in the capital city.

In 1887 Nead served as editor-in-chief of the Harrisburg Daily Patriot. In 1888 and 1889 he owned and edited the Harrisburg Morning Call in partnership with his brother Dr. Daniel W. Nead, a physician and noted genealogist.

B. M. Nead was also one of the foremost Pennsylvania historians of his time. He authored numerous books, pamphlets, and speeches. Today, Waynesboro: Centennial History, 1797-1900, is probably his best-known work. During his lifetime, however, Some Hidden Sources of Fiction (1909) brought Nead critical notice in both England and the United States; it is a comparison of certain fictional characters with their authentic Pennsylvania originals, and was most noted for its sharp criticism of Sir Gilbert Parker’s novel The Seats of the Mighty.

In 1917 Franklin and Marshall College bestowed upon B. M. Nead the honorary Doctor of Literature degree in recognition of his many accomplishments. He died at Chambersburg, and lies buried in Harrisburg Cemetery. High-school classmates Miss Shirley A. Zeigler (left) and Mrs. Eunice G. Statler (right) reminisce while Mrs. Angela Grove Weagly (center) smiles for the camera. Mesdames Statler and Weagly are daughters of the late Marion P. Grove for whom the highest level of support in AHA is named.

Vice-President Dorsett is a native of Waynesboro, Pa. He holds degrees from both Mount Saint Mary’s and Wake Forest Universities. He practiced law at Waynesboro for twelve years but is now managing member of Thaw Group, LLC, consultants. He has written and edited numerous historical, genealogical, and biographical works.

A number of years ago T.A. Dorsett wrote an unpublished bicentennial companion to Nead’s history of Waynesboro. In 1984 he wrote the chapter on Washington Township and Waynesboro for the official bicentennial history of Franklin County. In 1983 he founded the genealogical quarterly Antietam Ancestors and edited its first seven volumes. He has also edited two volumes of the Papers Read Before the Kittochtinny Historical Society. In 1999 Mr. Dorsett edited and, with his late mother, co-published Alma Mater, the history of the building which housed the former Waynesboro Senior High School and East Junior High School. Currently he is preparing a compilation of reminiscences titled Waynesboro As We Knew It.

On selecting T. A. Dorsett as the first Nead Fellow, President Rock says, “It was a no-brainer. The sheer volume, breadth and quality of Mr. Dorsett’s contribution to Antietam History over the past forty years made him the logical choice. (Mr. Dorsett abstained from the resolution naming him the first Nead Fellow.) President Rock also noted the close parallel between Nead’s and Dorsett’s careers.

Both Nead and Dorsett had ancestors who dwelt in the Antietam country of Washington county, Md. Both men practiced law in Franklin county, Pa. both were active in politics but never held elective office. Each probably edited as much material as he wrote. Nead and Dorsett both wrote some of their work anonymously. Both were officers in several historical organizations. Nead frequently gave “magic lantern” talks; Dorsett narrated slide presentations. Like Nead’s Some Hidden Sources of Fiction, Dorsett’s genealogical work on the Broadbent family of West Yorkshire has received notice in both England and America.

Ultimately, both men’s historical research and literary pursuits eclipsed their professional careers, and “nervous breakdowns” ended both of their law practices.

In accepting the Nead Fellowship, Vice-President Dorsett said he felt greatly honored. He noted that nearly all the persons who had encouraged his historical efforts are now deceased, but he expressed the hope that current and future generations will carry their torch. He acknowledged Nead as one of his primary inspirations, and indicated that even their own similar paths hold an historical lesson for those who fail to choose between demanding careers. “Good intentions and hard work can just as easily spell disaster as the can success.”